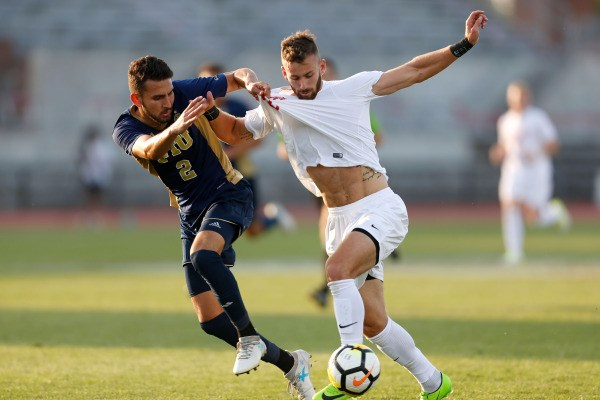 Photo: Nate Kohl and Buckeyes get undressed by Florida International University on Sunday. Not to pick on Nate,  but I thought this photo summed up the results against FIU; good on field effort but an exposed offense.

Coming off a stellar opening match defensive performance against Pitt, the defense could not maintain it’s effectiveness against FIU. The problem was two-fold; early, constant offensive pressure by FIU and a reluctance to shoot by Ohio State.

Florida International took advantage of offensive pressure early and often against Ohio State. They scored at the 6:58 mark on a rebound shot in the first period. In the second period, FIU scored a minute (at the 46:02 mark) into the stanza, then 12 minutes later to go up 3-0. At this point, nearly two thirds into the match, Ohio State had attempted one shot.

On a related note, albeit a limited sample size; the volume of shots does seem to matter. In last season’s 5 wins, the Buckeyes averaged 15 shots per game, averaging 2.2 goals in these wins. That’s a conversion rate of over 14.6% which is way above their overall success rate. Perhaps relatively frequent shooting pays off.

The Buckeyes host Lehigh University on Friday September 1st. The match begins at 7:30 pm. This is a great way to begin your Labor Day weekend. Be there. If you can’t be there, catch the game on BTN Plus (check local listings).