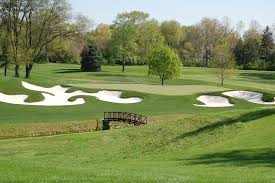 I want to get you caught up on some recent/current tournament action involving Buckeyes. At the time of this article, one tournament has been completed (Ohio Women’s Open) and three (Women’s Porter Cup, U.S. Open, Meijer LPGA Classic).

This tournament is 36 hole stroke play held at Eagle Rock Golf Club in Defiance, OH. Jessica Porvasnik repeated as winner in the Professional Division with a score of 69-70-139.

The golf course (6,130 yards, par 71) isn’t particularly long, but there are quite a few trees lining the fairways and almost every green has 2-3 bunkers. You don’t have to be long to play well, but you do have to be straight.

Zoe-Beth Brake is again participating in this tournament. It’s held at Niagara Falls Country Club in Lewiston, NY. This is a three day stroke play tournament.

I have played this course several times and have a passing some familiarity with it. Although not long (6,096 yds, par 72) for this event, it has similarities to Eagle Rock; tight fairways, heavily bunkered greens, undulating fairways and small, fast greens. Sitting at the edge of the Niagara Escarpment, it can get very windy, too. You really need to bring your “A” game to this course.

I had the pleasure of accompanying Zoe-Beth’s group for most of her opening round. I’ll get into more detail in follow-up posts.I’ll have more to report, in stand-alone articles over the next couple days.

Will Grimmer is on Long Island playing in the U.S. Open at Shinnecock Hills. Stay tuned for updates on Will’s progress.

Jaclyn Lee is playing on a sponsor’s exemption at the Meijer LPGA Classic in Grand Rapids, MI. Again, stay tuned for updates on Jaclyn.