BuckeyesOnTour: Not bad, not good 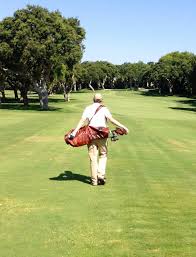 Ryan Armour, Emma Jandel and Katja Pogacar were all in action this past weekend. Well, that’s not exactly true, see below…

Ryan Armour was just outside Philadelphia, PA for the BMW Championship.  He had rounds of 67-67-68-76-276 (-4). He had to play well to get into the top-30 for the Tour Championship. He had three good opening rounds, but a poorly played final round.

Ryan opened up with a birdie barrage on his opening nine (6 birdies, 1 bogey) for a 65 (-5) to start the tournament.

Ryan’s second round was a bit more sedate with 3 birdies and no bogeys -> 67 (-3). It’s a big event and Ryan gave no strokes back to par. Friday was a good round.

Ryan’s third round was pretty much like his second. Three birdies but one bogey. (It was a 3-putt from 72′, so certainly understandable). The 68 (-2) kept him in the hunt. Now a good final round is needed to move him into the Top-30 for the Tour Finals.

Ryan had a good year. When he needed a very good final round to possibly move into top-30 and the Tour Championship, it didn’t happen. It has to be disappointment to Ryan for his final round of the year to not be what he wanted. Regardless, it’s good to see Ryan’s game steadily improve year after year.

Emma began play in her opening round on the back nine with a bogey. She rebounded with birdies on two of her next six hole to get to -1. She played the final 11 holes in even par for a nice opening round of 71 (-1).

Emma’s second round began on hole #1 and began with 3 birdies in her first six holes. A bogey on hole #11 was her only blemish. She Parred her final seven holes for a round of 70 (-2), which put her at -3 for the event.

This was a nice tournament for Emma. Her accuracy (79% fairways, 80% greens) really set her up for some good scoring. Also, Emma was 3/3 on sand saves, so she managed to save par from sketchy lies. Every stroke counts…

Katja got off to a horrible start in her first round. She triple-bogeyed her first hole and was +6 after four holes. She parred out her front nine to make the turn at 42 (+6) and settled things down with a 37 (+2) on her back nine, but the round of 79 (+8) was a killer.

Katja did rebound well in round two. She made the turn at 36 (E). On her back nine, she parred eight consecutive holes. She finished in style by birdieing her final hole of the round, and the tournament for a  back nine of 34 (-1).

Aside from a fairly disappointing first hour or so of play, I thought Katja did well. She played her last 27 holes in +1 to par. The “fly in the ointment” for Katja was a triple-bogey and two double bogeys; the +7 to par on three holes accounted for her “over par” showing. Really, the grief on these three holes was likely caused by three “not what I wanted” swings.

From what I’ve seen this year, these “big number” holes are an aberration for Katja. She usually plays to keep the ball in play. Which is good. One issue is she needs to make more birdies. I think this will straighten out with more Tour starts for her. With this being her first season on LET, these courses are not familiar to her. When she gets familiar and comfortable with the courses, she’ll have a much better sense of where to ‘put’ the ball to give her more reasonable birdie opportunities. So, I think we’re in good play – good learning mode for Katja. Tour golf can be pretty damned unforgiving.