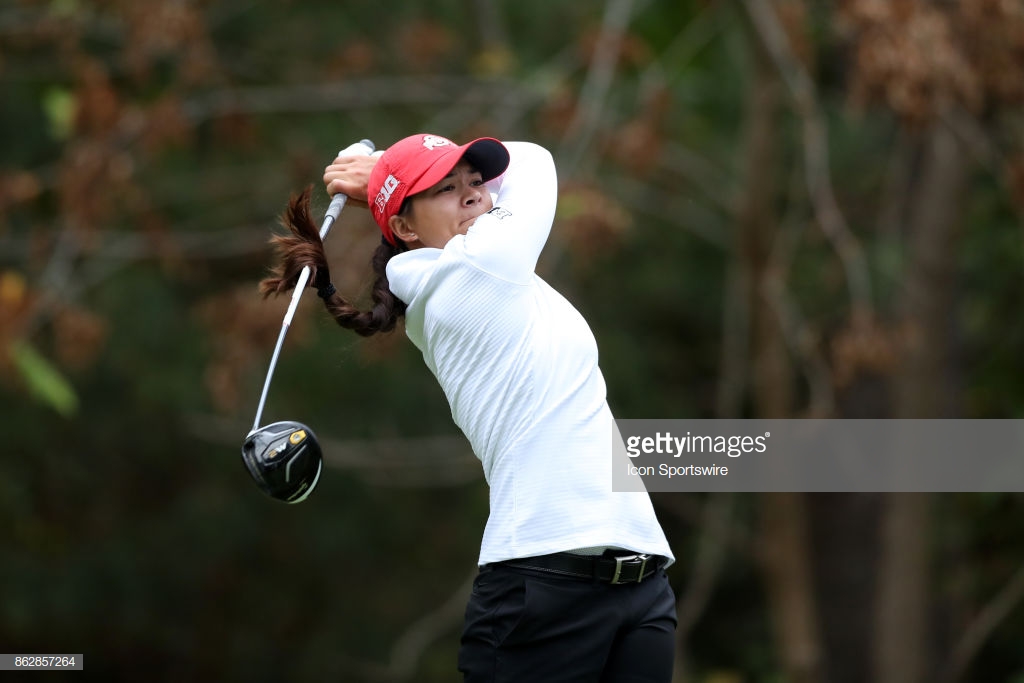 The Buckeyes were off to Chapel Hill, NC for the Ruth’s Chris Tar Heel Invitational played October 12th – 14th..

This is 54 holes (three rounds) of stroke play. eighteen holes scheduled per day, Friday through Sunday.

The UNC Finley Golf Course was set up to a length of 6,379 yards and played to par 72. This appears to be a “blend” of holes using the course’s Gold and Blue tees. I’ll guess that the course would be rated somewhat higher than 76.1 with a slope higher than 140 from this set-up. For comparison, the course I play is a bit longer with a rating/slope of 70.2/113. This is a brutal set-up.

The eighteen team field is:

The Buckeyes will tee it up with:

This is another interesting lineup combination for the Buckeyes. A core group (#2 – #5) of Alex, Yukie, Adeena and Lauren tee it up. After a week off, Niki slides into the #1 position. You’ll notice that Jaclyn Lee is not in the lineup. I’ll get to that later…

Niki went around the course in rounds of 75-78-77-230. Her rounds were pretty solid, and in the case of her 2nd round, “Oh so close”. In round 2, Niki was -1 through seven holes before she boarded the ‘bogey train. She bogeyed her next 7 holes. You don’t have to be off by much, just a little, at this level.

Her 7 birdies were the most by any Buckeye. She was one of two players to play a ‘clean’ round; scoring nothing higher than bogey. Her 21 bogeys were the most of any Buckeye, due to the 2nd round stretch of holes.

Alex had rounds of 79-78-78-235. Clearly, she wasn’t able to ‘go low’, but Alex was resilient enough recover from over-par play. Her longest stretch of consecutive over-par holes was 2 holes, so she was able to break and negative trends and not go into a slide with her scoring.

Her 4 birdies were the least by any Buckeye. On the other hand, her 31 pars were 3rd most on the team. She had 16 bogeys (not bad), but also 2 double bogeys and a triple bogey.

Yukie shot rounds of 77-78-78-233. Her rounds were pretty solid, especially when looking at her play on the front nine.  Yukie’s aggregate scoring on the front nine for all three rounds was +2. That’s pretty good, consistent play.

She had 6 birdies in this event. Yukie also had 29 pars and 16 bogeys; both respectable numbers. She also had 2 double bogeys and a triple bogey.

In Jaclyn’s absence, Adeena picked up the mantle. Adeena toured the course in rounds of 72-76-76-224. Her rounds were pretty solid. Her opening round was a classic ‘4 birdie, 4 bogey, 10 par’ round of level par. No sweat. Her next two rounds were akin to one another; 1 birdie, 5 bogeys and 12 pars, each. She probably would have liked another birdie or two, but if you are parring 2/3’s of your holes and your worse play is a handful of bogeys, you’re having a pretty decent round.

Adeena had 6 birdies for the three rounds. Along with Niki, she was one of two players to play a ‘clean’ round; scoring nothing higher than bogey. Her 34 pars were the most by any Buckeye and her 14 bogeys were the least. These were simply three well-played rounds.

I could almost cut-n-paste my comments about Adeena for Lauren. Lauren had rounds of 76-76-76-228. Her opening and final rounds were of the fairly sedate variety; 1 birdie, 5 bogeys and 12 pars. Her middle round was a bit more colorful; 4 birdies, 5 bogeys and the triple bogey. There are several ways to shoot a 76…

Lauren had 6 birdies for the three rounds. Her 32 pars were the 2nd most by any Buckeye (Adeena) and her 15 bogeys were 2nd least (Adeena). Lauren did have one triple bogey. This was a good tournament for Lauren. It’s good to see an Empire State-er do well. OK, she lives in the other side of the state, but still…

This was a consistent, even-keeled performance by the Buckeyes. However, they still struggled to score on what I feel are the scoring holes; the par-3s and par-5s. In all fairness, the par-3s played to an average of 3.18 in the event, so OSU’s 3.30 isn’t too far off the mark. Par-5s are another issue. The Par-5s were played to an average of 4.98, just below par. OSU’s 5.27 is, despite the decimal points, giving way strokes to the field.

This was actually an interesting clustering of scoring. No one went ‘low’, 72 was the low round. No one went off the rails, 79 was the high round. The majority of the scores were bunched in the 76-78 range. In my section on The Course, I mentioned I thought this was a brutal setup for scoring. The field averaged 75.1 and Ohio State averaged 76.25, so again, they weren’t far off the mark.

I want to step back from the Tar Heel Invite for a moment. Regardless of team finish, this was a good week for OSUWG. All nine players on the roster are playing. Niki, Alex, Adeena, Lauren and Yukie were in Chapel Hill. Lexie, Alanis and Sofia are playing at the Dayton Fall Invitational. If you’re looking for Jaclyn Lee, she is in Florida participating in Symetra Tour Stage II qualification. Also at the Stage II event are alumnae Katja Pogacar and Rio Watanabe.

At the end of the week I’ll recap the Stage II exploits of Jaclyn, Katja and Rio.

The Buckeyes head to San Marcos, TX for the Jim West Challenge. The event is scheduled from October 28 – 29.