Will began his round on the 4th hole with a birdie. (Always a nice start).  He bogeyed his closing three holes of the front nine, but flogged the back nine in 34 (-2). Will had his round at -1 through 17 holes, but a double bogey on #18 got him to the clubhouse at 73 (+1). His four birdies were most for a Buckeye in team competition and tied for most of any Buckeye (Kevin Stone) on the course.

Daniel began his round on the 6th hole with a par and was a solid +2 through 10 holes of play. A triple bogey (ugh) on #16 was offset by birdies on 3 of his next 6 holes. Daniel’s 3 birdies were second most of any Buckeye in team play.

Laken began his round on the 8th hole with a par and with a back nine of 38 (+2) was +2 to par through 12 holes of play. A birdie on #4 somewhat ameliorated two bogeys on the previous two holes, but double bogeys on two of three closing holes scuttled a potential good round.

Will began his round on the 7th hole with a par, and through nine holes of play was even par for the round. He staggered trough four consecutive bogeys, then played the final five holes in -1 to par. Aside from the four hole bogey stretch, Will had a well played (level par) round.

Caleb began his round on the 5th hole with a par and liked it so much he recorded 14 pars for the round. Throw in 2 birdies and 2 bogeys and Caleb cards a 72 (E). So, 16 holes of level par golf. That’s having your game under complete control.

Kevin had, except for a double bogey on #13, a very well played round. he had 4 birdies and 9 pars.  His score of 74 (+2) was 3rd best round of the day in Individual play and his 4 birdies were tied for most (WILL G) of any Buckeye on the course. Another impressive round.

Justin’s round featured a decent front nine (38, +2) followed by a horror show back nine (44, +9). Look, golf tends to be a momentum game; when it gets away from you, you just hold on to finish the round. 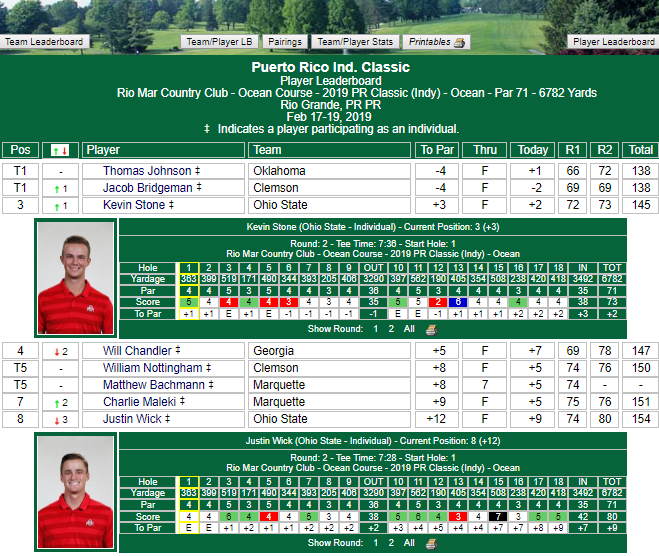 This was a round where games weren’t as sharp as the previous round. In the first round recap I posed the following:

Monday’s round will be interesting to see if Will G and Caleb can continue their stellar play (possibly).

and if Laken can avoid the big numbers (probably).

Ohio State had 57 pars, giving them 112 through two rounds. They had 12 birdies giving them 27 for the tournament and still have their 2 eagles.

The table below, summarizes the round by round team scoring for each category; birdies, pars, etc.