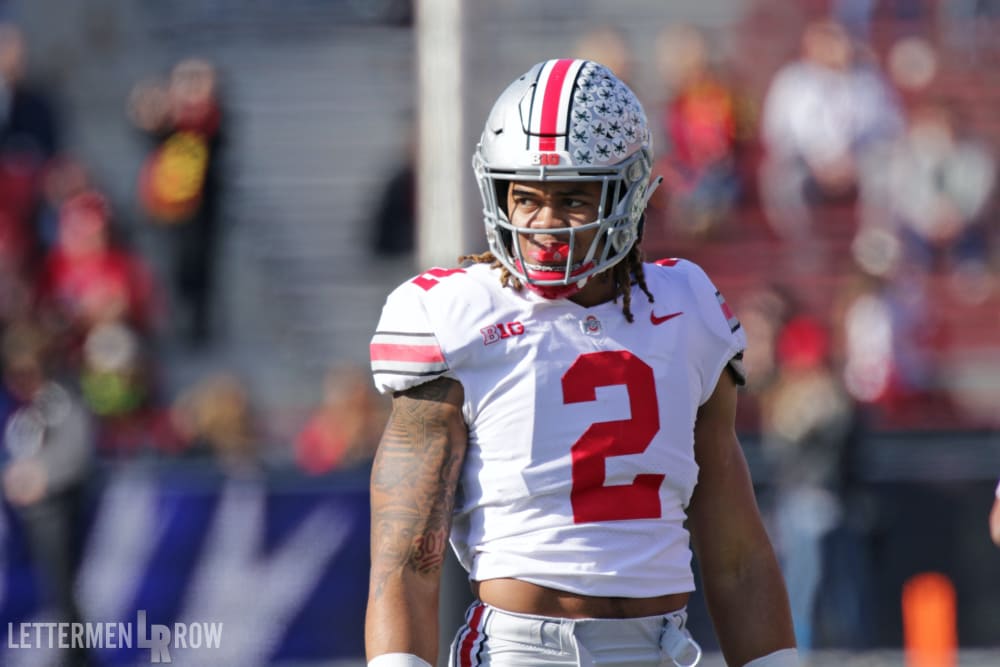 How do I begin this? First and foremost you want to be respectful (unless it’s to the cesspool of the world and a – what was it Coach Harbaugh, “a thorough beating” 35-14?) but I’m digressing here – Shame on me for being so sophomoric. Let’s journey back – Miami and The Ohio State University this late afternoon ….

It all begins with reality. Miami, the Mid-American Conference opponent, who “did” accept a nice pay-check to be a 39 point underdog, actually got more than they ever imagined. Let’s attempt to decipher it ….

In a 76-5 dousing the Redhawks actually held a weird and certainly odds-unlikely 5-0 lead. Their 5 points would end there.

The 6th ranked Buckeyes suddenly decided to play some ball. The answer came in a 42-point second quarter explosion which fueled the 76-5 victory in the final non-conference rehearsal before Big Ten play resumes in next week.

Miami of Ohio came into this battle with an offensive tactic that confronted the Buckeyes in “new” ways: Quick, precision slant passes and out routes. The Buckeyes had not dealt with this in any of the first three opponents, nor had any of the “previous” “guests”, or in Indiana’s case, “homies”, had achieved a first down on its opening series. The Redhawks had two in their first five plays.

Two plays after a punt pinned Ohio State at its own 2, Miami of Ohio linebacker Myles Reid got past J.K. Dobbins and swatted the ball loose from Justin Fields’ long release. The ball rolled out the back of the end zone for a 2-0 Redhawks lead and the Buckeyes’ first deficit of the season.

Miami of Ohio then marched into the red zone again before the Buckeye defense stiffened and forced a field goal try. Yet at that point, Ohio State was playing on its heels against the Redhawks, appearing baffled in their coverage’s and now trailed 5-0.

It wouldn’t be longer after that that the Buckeyes decided to resolve their defensive issues. It allowed only 22 net yards and three more first downs in the first half. The harassment of the Miami quarterbacks, with Chase Young twice reaching Jackson Williams for strip sacks recovered by Ohio State, could be considered criminal – that is if you’re a Redhawks fan. The Buckeyes gave a lot of reps to their depth players early and they responded, with defensive tackle Haskell Garrett, linebacker Baron Browning and others pulling Redhawks down behind the line of scrimmage.

Ohio State recorded 11 tackles for losses in the first half, setting the stage for the program’s highest-scoring quarter since 1960.

When he wasn’t smelling paint at his back, Fields whetted opportunities. He would complete 14 of 21 passes for 223 yards and four touchdowns and ran for two more TD’s. Justin’s job was completed by halftime, at which the Buckeyes commanded with a 49-5 lead.

Fields impressed on both of those scoring runs, keeping the ball on a focus to the zone read. On a third-and-20 play late in the half, he threw a bolt over the top to Binjimen Victor who (with memories of Chris Carter) made a leaping grab in the back of the end zone for a 30-yard touchdown grab.

An early 5-0 deficit to Miami won’t be the most undesirable picture Fields faces this season. But, let’s say it as it should be said – his self-assurance and execution is in a good place.

Young recorded a sack in his sixth consecutive game and now have accumulated seven for the season. Opposition continues to attempt to block him, mano-a-mano, yet, he continues to punish them, leaving their quarterbacks with opportunities to decide what to do while under pressure as he bulldozes in their direction.
Cornerback Jeffrey Okudah, what can I say? I want him to be a Cincinnati Bengal. But that path may be a hindrance for him, so I suppose I need to surrender that dream and comprehend that I want the best for him – he receives high marks for this game – as usual. He has a wonderful size and technical skills. I recall Eli Apple, though making no comparisons, I see a gifted player, even though he has entered the season with no interceptions. Okudah – keep an eye out folks!

That narrative ended early in the second quarter when he made a diving interception of freshman starter Brett Gabbert. Ohio State scored three plays later on Fields’ 7-yard run and the rout was on.

True freshmen made the absolute best of their opportunities. Garrett Wilson amassed 54 yards along with a touchdown on a team-high four receptions. His classmate and fellow receiver Jameson Williams broke off a 61-yard touchdown reception from Gunnar Hoak – while running back Steele Chambers closed the scoring with his first career touchdown run.

Defensive end Zach Harrison recorded a pair of tackles as the second-string defense held Miami of Ohio to 23 second-half yards.

This massive victory, whatever may be said, is a well-to-do delivery for their starters’ health and well-being – giving the depth chart opportunities. Watch – folks – this is a good thing. Reps are needed and a lot of these kids got it in this game. So, when you look at a 76-5 win often what his seen, or worded within a mind is “Wow!” But what is not realized to the “supposable” arm-chaired quarterback is the need to get the “clicks” for the future – be it next week, three weeks away, or next year. There’s always a need to think ahead even when you are enmeshed within decisions of the now. Do I sould like Confucius?

Nebraska who some have projected as major Big Ten West Contenders. Last year was a 36-31 victory in Columbus for the Buckeyes. Is there a Cornhusker revenge factor that must be recognized? Nebraska quarterback Adrian Martinez has accounted for 338 total yards and three touchdowns thus far and is not anyone to sneeze at. There must be a focus on him – Chase Young HELLO!