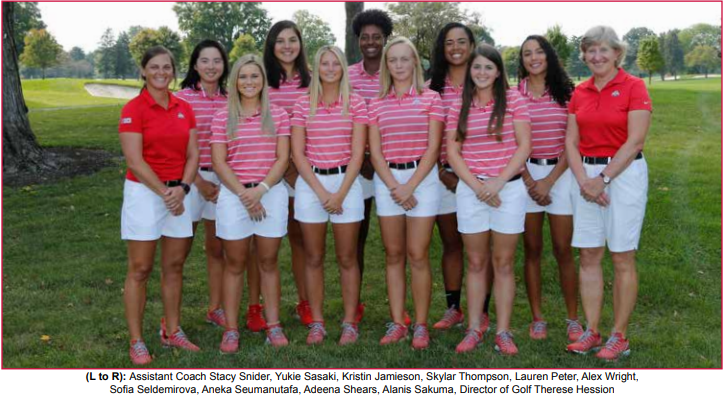 The Ohio State Women’s Golf team travels to Peoria, AZ for the Westbrook Invitational. This is a sixteen team field with 54 holes of competition played over two days. Thirty-six holes are scheduled for Sunday and the final eighteen on Monday.

Course: Westbrook Village Golf Club – Vistas Course. It is set up at 6,252 yards, playing to par 72.

Field: This is an 16 team field. Below are the participants and their current Golfstat ranking.

One thing of note occurred in the afternoon round. Anna Zanusso of The University of Denver tied an NCAA scoring mark with a score of 61. She had 11 birdies and 7 pars. Seriously…

Aneka was +2 through ten holes in her opening round. She birdied 3 of the next five holes to get to -1 then birdied her penultimate hole to finish at -2. The afternoon round was almost the same drill; through her first eight holes, Aneka was +2. Remember that “birdie 3 of 5” hole stretch in the morning round? She birdied all five of them in the afternoon. She birdied her final hole to close out a -4 round.

Aneka had 13 birdies. 16 pars and 7 bogeys.  Her 13 birdies placed her T-3 in the field. She tied with Lauren for fewest bogeys on the team for the day. She had the fewest pars on the team, but if you’re busy making birdies, it’s understandable…

Yukie had 4 birdies. 24 pars and 8 bogeys. Yukie tied Alex with most pars by a Buckeye on the first day.

Lauren clearly had moments of solid play to finish +1 over thirty-six holes. Interestingly, Lauren had the longest stretch of par-or-better play of anyone on the team. In her morning round, at no point was she over par. In her afternoon round, Lauren was par-or-better for her first six holes. That’s 5 1/2 – 6 hours of never being over par. That’s astounding.

Lauren had 6 birdies. 23 pars and 7 bogeys. Lauren tied with Aneka for fewest Buckeye bogeys on the day.

Alex had an interesting day. Her opening round was fairly well played except for double bogeys on holes #7 – #8. She avoided double bogeys in the afternoon round, but tacked on a few more bogeys.

Alex had 2 birdies. 24 pars, 8 bogeys and 2 double bogeys. She actually led OSU in pars and was about average in bogeys, but the scarcity of birdies gave her no chance fr a good score.

Here is Round 1 hole by hole scoring. 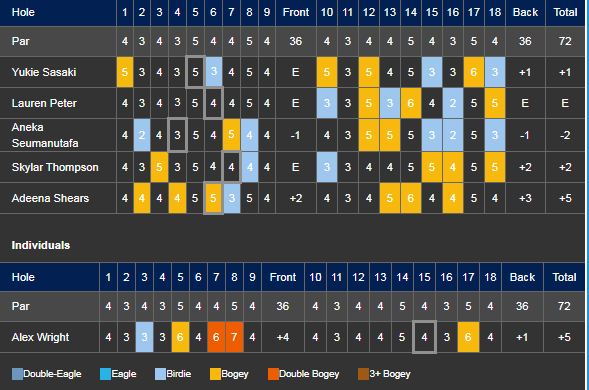 Here’s Round 2 hole by hole scoring. 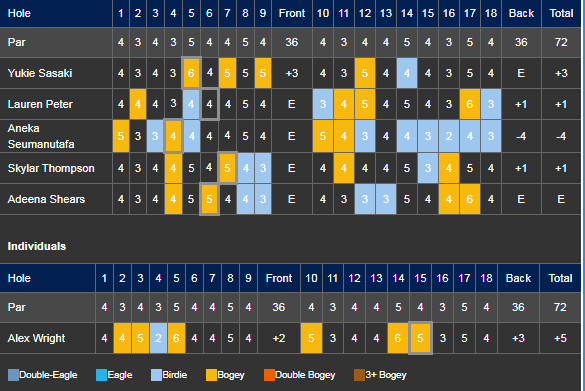 You’ll notice two things here. First, the Buckeyes sharpened their games in the afternoon. The number of birdies increased and the number of bogeys remained the same. Second, there were no scores higher than bogey. There were, collectively, 180 holes of golf and no one scored higher than a bogey. That is amazingly consistent. In a good way.

They are 4th in the field in birdies and 15th in pars. Their number of bogeys can be grinding on a scorecard, but, the team made a a hell of a lot of birdies and nothing higher than bogey – so we’re good here.

The Buckeyes had a decent enough morning round, then got down to business in the afternoon round.  They had stretches of good play, which should build a bit of momentum going into the final round. They are only four strokes out of 7th place and five out of 6th, so, who knows? It could get pretty exciting in final round.

Final round on Monday. There is a shotgun start at 8;30 am (Mountain Time).

One thought on “Aneka leads Buckeyes in Westbrook Day 1”